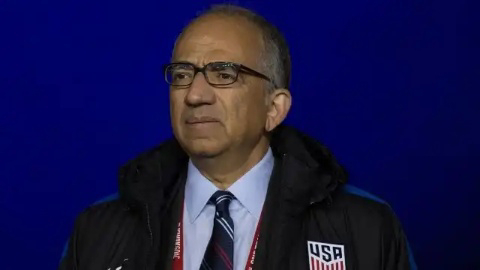 Julie Foudy discusses a judge ruling against the USWNT in favor of US soccer in equal pay lawsuit. (2:14)

Lydia Wahlke has resigned as the U.S. Soccer Federation's chief legal officer, the USSF has confirmed to ESPN.

Grant Wahl was the first to report the news.

- Stream new episodes of ESPN FC Monday-Friday on ESPN+- Stream every episode of 30 for 30: Soccer Stories on ESPN+- Where Europe's top leagues stand on finishing 2019-20 season

In a statement to ESPN, the USSF said that Wahlke had resigned her position and "agreed to provide consulting services as requested through Sept. 15. We would like to thank Lydia for all her hard work and dedication during her time with U.S. Soccer, and wish her the best in her future endeavors."

Wahlke's decision comes in the wake of an investigation by an outside law firm into the USSF's legal strategy as it pertained to the equal pay lawsuit filed by members of the U.S. Women's national team. Earlier this year, the USSF and its lawyers filed documents containing inflammatory language stating that the players didn't have the same skill, ability, and responsibility as their male counterparts.

Then-USSF president Carlos Cordeiro said he hadn't read the filing before it was submitted to the court, but the uproar that ensued resulted in his resignation, with Cindy Parlow Cone replacing him.

"It should be clear that while Carlos Cordeiro did not review or approve of the offensive language in the filing, by personally resigning he decided to put the best interest of U.S. Soccer first," Parlow Cone said in a statement.

The USSF also switched law firms, and the inflammatory language was removed in subsequent filings. Wahlke was placed on administrative leave while the investigation took place.

It later emerged that Cone was part of an internal litigation committee that included USSF board members Patti Hart and Tim Turney. In a conference call with reporters back in March, Cone said that neither she nor any other board member had seen the filing before it was submitted, and that this was down to an "error" in the USSF's internal processes.

The USSF said it wouldn't make the findings of the investigation public.

No board members are expected to lose their positions as a result of the investigation.

"With the lawsuit still pending, we have been advised by our attorneys that we should not publish the report or disclose the entire substance of counsel's conclusions, and we are following that advice," the USSF said.

The statement added: "Moving forward, substantial legal filings of this nature will be required to be shared with the president, members of our board, and others within the federation for review in a timely manner to ensure we do not encounter a similar situation where language inserted by outside counsel would be in contrast with the federation's philosophy and beliefs."

In filing the suit, the players had alleged that the USSF had violated the Equal Pay Act as well as Title VII of the Civil Rights Act by paying them less than members of the U.S. Men's national team. Earlier this month in federal court, Judge R. Gary Klausner ruled against the players on many of the key points in the suite, granting the USSF partial summary judgement on the Equal Pay Act claims, and some of the Title VII claims, leaving only Title VII issues regarding discrimination in charter flights and hotel accommodations and medical and training support. The players have appealed Klausner's ruling

By World news May 22, 2020
Scientists looking into cannabis as a possible cure and treatment for Covid-19 have said that they believe the plant could have the potential to reduce infection by as much as 70 percent.    Nigeria to legalize cannabis cultivate,sale and use In a study conducted by researchers from the University of Lethbridge in Canada, it was found that at least 13 strains of cannabis were high in Cannabidiol (CBD) — an essential component of medical marijuana that has been used to treat anxiety and insomnia — that affects the ACE2 pathways that the SARS-CoV-2 virus uses to access the body of its host. The results, which were obtained after parsing through 400 different strains, were published in online journal Preprints and indicated that hemp extracts high in CBD might help block proteins that provide a "gateway" for the coronavirus to enter the cells. "The virus has the capacity to bind to [ACE2] and pull it into the cell, almost like a doorway," Olga Kovalchuk, on
37 comments
Read more